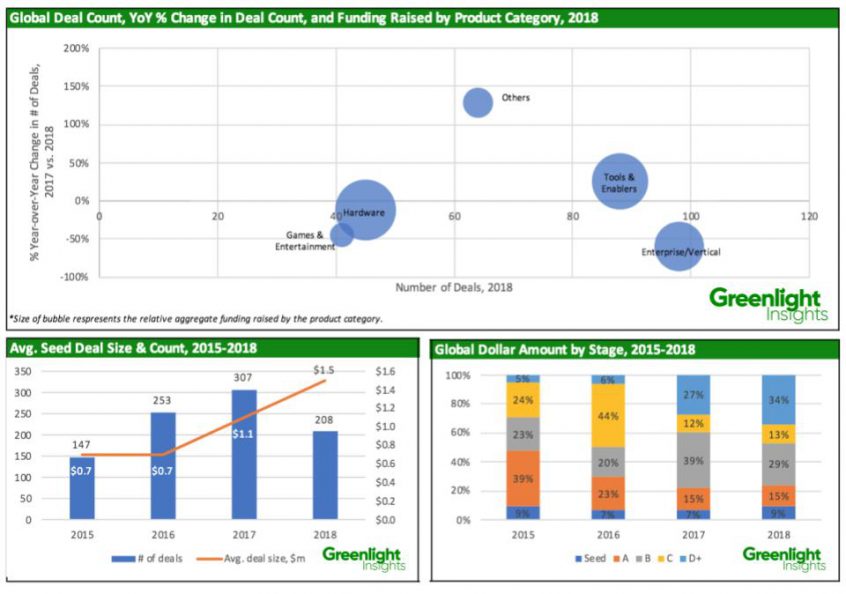 In 2018, a record high of $2.8 billion was invested in virtual reality and augmented reality (xR) technology-related startups globally. Although several promising new companies like Spatial, Wikitude, and Vantage Point raised their substantial early rounds during 2018, the $2.8B tally, the $2.8 billion tally was driven primary by large, late-stage venture capital rounds, such as those raised by Magic Leap, Sky Limit Entertainment, and WayRay.

The xR industry saw late-stage deals account for an outsized proportion of total capital invested. Though the average seed stage deal size shot up to $1.5M compared to $1.1M in 2017, we observed only 210 seed-stage VR/AR deals completed in 2018 (one-third fewer than the number for 2017). Given that Seed through Series B deals represented more than 60% of total funding raised in the years 2015-2017 vs. 53% in 2018, it begs the question, 'Have the attitudes of early-stage investors have permanently soured on VR/AR investments, or if this is just a temporary blip?'

One place where investors sentiment is still positive appears to be vertical-specific solutions. In 2018, investors were most eager to fund enterprise & vertical solutions, as the number of these deals rose sharply, accounting for half of all deals in 2018. Companies offering enterprise services, such as productivity tools and custom project production, or vertical-specific offerings (e.g. Healthcare, Education, Location-Based Entertainment) received the majority of deals.

In terms of aggregate funding, hardware and tools & enabling technologies accounted for 72% of all VR/AR funding in 2018.

We expect the momentum in VR/AR enterprise and vertical-specific solutions established in 2018 to carry forward in the first half of 2019. In fact, we would expect to see another record-breaking year in terms of total funding, the number of deals, and average deal size. With a robust and well-capitalized startup pipeline, we anticipate more exciting funding announcements, which we will analyze in our annual VR/AR Mid-Year Funding Review.

Want access to the full report? Order the 2019 VR/AR Mid-Year Funding Review or inquire today about how your organization can benefit from Greenlight Insights' research and services.

To continue the discussion, join us for our fourth annual xRS Week, a three-day immersive technology conference in San Francisco that brings together over 500 diverse minds from technology, business, media, and beyond to tackle VR/AR’s most challenging problems through interactive programming. Early bird tickets are on sale now—snag yours before they sell out!