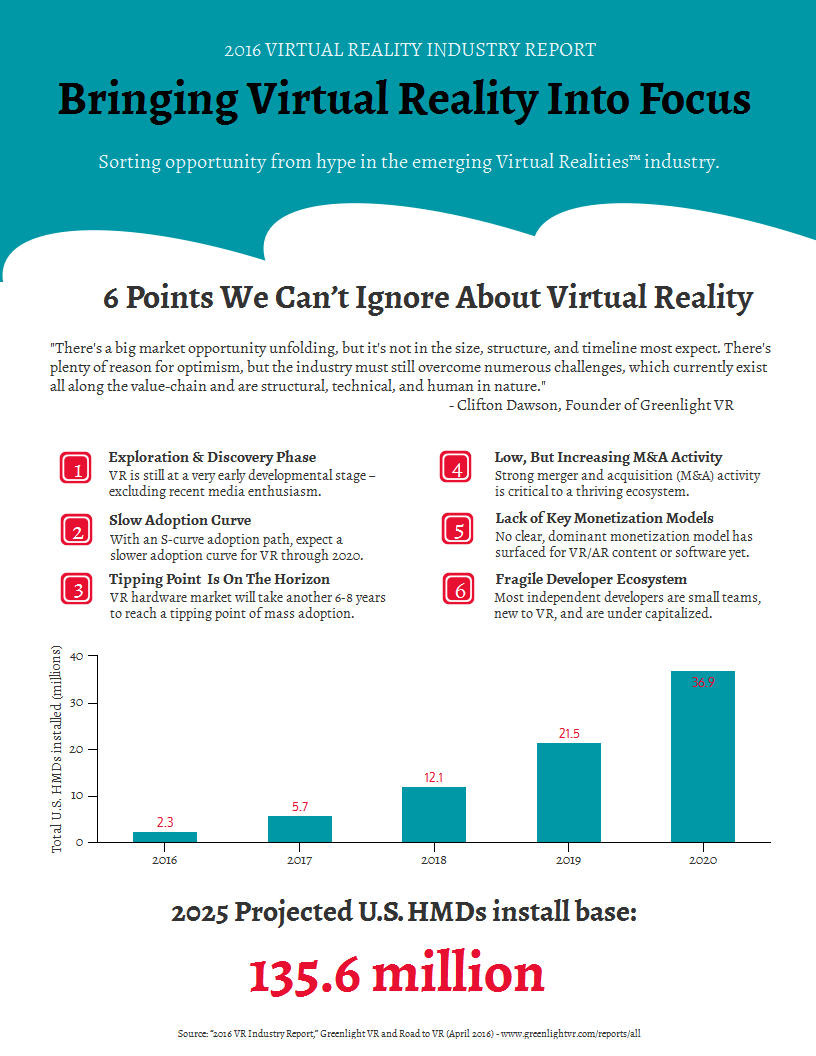 SAN FRANCISCO (APRIL 13, 2016) - Despite the broad use of virtual reality in many enterprise and industrial verticals, and the recent media and investor interest, a tipping point in adoption of the medium is still several years away, according to Greenlight VR (@GreenlightVR), the leader in business intelligence for the global Virtual RealitiesTM economy.

The “2016 Virtual Reality Industry Report” released today by Greenlight VR and Road to VR, offers a 10-year outlook for the VR industry, mainly driven by hardware, specifically head-mounted devices (HMDs). The report indicates the total number of U.S. VR headset sales is expected to grow from 2.3 million in 2016 to 136 million in 2025. This total install base is comprised of:

“There are disruptions unfolding and exciting new markets being created, but not in the size, structure, and timeline most expect,” said Clifton Dawson, Founder of Greenlight VR. “While we forecast a slower adoption curve over the near term, we’re encouraged by the degree of progress being made by large and small companies in the space. Ultimately, we are optimistic that the industry will overcome current obstacles, which exist all along the value-chain and are structural, technical, and human in nature.”

The Sorting-Out Process on the Path to Mainstream Adoption

According to the report, there will be a natural sorting-out process, by which various hardware configurations evolve to optimize specific vertical use cases. The report suggests this process may be confusing and frustrating for consumers, and will impede the short-term outlook. A look back at the sorting-out process in the earlier generations of VR headsets, console gaming, smartphones, tablets, PC/laptops, and VCR, and DVR product categories offers clues to some of the issues VR may face - conflicting standards, compatibility issues, technological dead-ends and market failures.

“The ‘moonshot’ platform, a headset that is entirely self-sufficient and can support several modalities - VR, AR, mixed - is probably six to eight years in the future,” said Steve Marshall, senior vice president, Greenlight VR. “It will require significant advances across multiple, interrelated technologies.”

About the 2016 Virtual Reality Industry Report

The 2016 Virtual Reality Industry Report, co-authored by Greenlight VR and Road to VR, provides a comprehensive and data-driven perspective of the global VR industry. Analysis is drawn from data on thousands of companies from public and proprietary sources, and extensive qualitative and quantitative research conducted by Greenlight VR. The report is intended to help industry decision-makers at global technology companies, Fortune 500 brands, startups and investment firms better understand the current technologies, investment activity, and consumer perceptions and behaviors, so they can make better strategic decisions. The report includes:

The report is available now and can be ordered online at www.greenlightvr.com/reports/2016-industry-report.

Greenlight VR is the industry leader in business intelligence for the virtual reality global market. By maintaining the most comprehensive dataset of information on companies and consumer behavior for the Virtual Realities™, Greenlight VR provides global technology companies, Fortune 500 brands, and innovative startups proprietary research and advice to make better strategic decisions. Visit www.greenlightvr.com for more information and follow @GreenlightVR on Twitter.