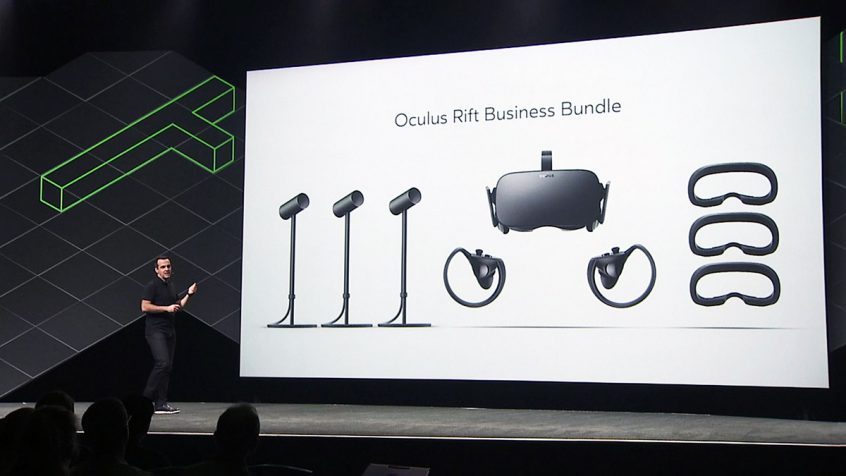 Virtual and augmented reality-enthusiasts will have a taste of what’s next in immersive technology at the 6th annual Oculus Connect 6 (OC6) happening on September 25th and 26th. Here are some of the trends Greenlight Insights expects to be center stage at the conference:

With a suite of first-generation VR products, Oculus is focusing more on content creation and development, primarily gaming. Oculus and its parent company, Facebook, has long invested in first-party content for its platforms, but 2019 will spur a resurgence in efforts as Oculus looks to cement Quest as an established gaming platform for consumers ahead of the holiday season.

Several Oculus-exclusive VR games are slated to come out at the end of this year, including Stormland, Asgard’s Wrath, and the second episode of Vader Immortal. Lone Echo II, the anticipated sequel to Lone Echo, has been pushed back to early 2020. Expect further details about these titles at the conference.

The most anticipated untitled VR shooter from Respawn Entertainment, developer of the Titanfall franchise, will finally be unveiled at the conference's keynote. Back in 2014, Oculus announced a partnership with Respawn Entertainment to create an AAA-quality first-person combat shooter exclusive to the Oculus Rift. Furthermore, Facebook’s reported deal with Ubisoft to have popular games, Splinter Cell, and Assassin's Creed, as VR exclusives in its platform are highly likely to be announced.

While these titles may be considered as "game-changers", building a self-sustaining ecosystem for VR is still a problem. To encourage developers, Oculus CTO John Carmack offers his expertise to review submitted games and applications for Quest and Go. Attendees will have the chance to listen to game developers that brought Vader Immortal: Star Wars VR Series and SUPERHOT as they share tips and tricks on how to create an immersive adventure in virtual reality. Beat Games will be sharing their lessons, from building, launching, and iterating the infamous VR rhythm game, Beat Saber.

The success of titles and its supporting developers is key to not only to encourage a strong developer community and to build a substantial content library, but to encourage AAA titles and building gaming franchises that will, in turn, build a loyal customer base.

The OC6 tagline, “This is where the next chapter for AR and VR begins” may be the most noticeable aspect of this year’s conference. Oculus Chief Scientist Michael Abrash repeatedly mentioned at OC5 that while VR and AR are currently separate technologies with different industries, the two will eventually converge. This convergence is well underway at Facebook, evident through its public future roadmap.

Facebook is currently working on two AR smartglasses, internally codenamed Stella and Orion. Reports also suggest Facebook is partnering with Luxottica, the owner of Ray-Ban and Oakley brands, to develop smartglasses. With a standalone augmented reality division, resulting in the recent restructuring of Facebook Reality Labs, it is evident that the company is working on augmented reality hardware.

At the recent F8, Facebook made its augmented reality platform, Spark AR Studio, open to Instagram supporting both Windows and Mac, allowing more developers to interact with the platform, expanding the AR ecosystem.

Having a dedicated team working on augmented reality, existing hardware, and its own platform, Facebook is close to introducing an AR smartglasses prototype. Regardless, the social media giant has been focusing developments on mobile augmented reality for social and retail experiences.

At OC5 last year, presentations varied from software, platform strategy, to tools for content development, but hardware definitely took the spotlight. Zuckerberg introduced the Oculus Quest, a standalone VR headset with hand presence and 6DoF. This completes the company’s first-generation VR products together with Oculus Go and Oculus Rift.

After just four months from the release of Quest and Rift S, Facebook has already reported an increase in revenue driven by both headsets. Oculus will most likely choose to expand support for these platforms with accessory or peripheral hardware instead of new headset releases. There have been reports that Oculus is working on incorporating hand tracking to its products in the short term.

Oculus for Business saw a significant renewal alongside the introduction of new hardware like Quest at this year’s F8 Conference. The platform is billed as an enterprise solution with a suite of tools designed to streamline and expand virtual reality in the workplace. The company also offers a dedicated software suite offering device setup and management tools, enterprise-grade service and support. Official enterprise partners like Osso VR, an immersive surgical training solution available on Oculus Rift, reported a 230% increase in performance. More recently, Walmart enacted a landmark deployment of 17,000 Oculus Go headsets as standardized training tools for its associates, who reported a 10-15% improvement in performance.

Despite initial growing pains due to a nascent enterprise VR software market and unproven ROI propositions, businesses are starting to adopt virtual reality in the enterprise because of better efficiency rates, quicker turnarounds, and improved learning retention from its employees. With Quest and Go comprising the company’s flagship business hardware offerings, Oculus is doubling down on its faith in the appeal of the standalone VR form factor for most business applications.

Abrash's introduction of the Codec Avatars from OC5 last year may be the key to social VR. Codec Avatars uses 3D capture technology and AI systems for the creation of fully customizable, realistic avatars, leading to authentic social interaction in virtual reality.

As a social networking company, Facebook's social VR offerings are currently fragmented in different platforms, namely Oculus Home on Rift, and Oculus Rooms and Oculus Venues on Go and Quest. Offering a unified social VR app that allows users with different headsets to interact with one another, coupled with Codec Avatars, creates a realistic environment in virtual reality.

Three sessions will be dedicated to discussing Facebook’s future in social VR and how to build identity and social experiences. This will be important as Oculus and Facebook look to build an active, platform-agnostic social community as headset sales increase.