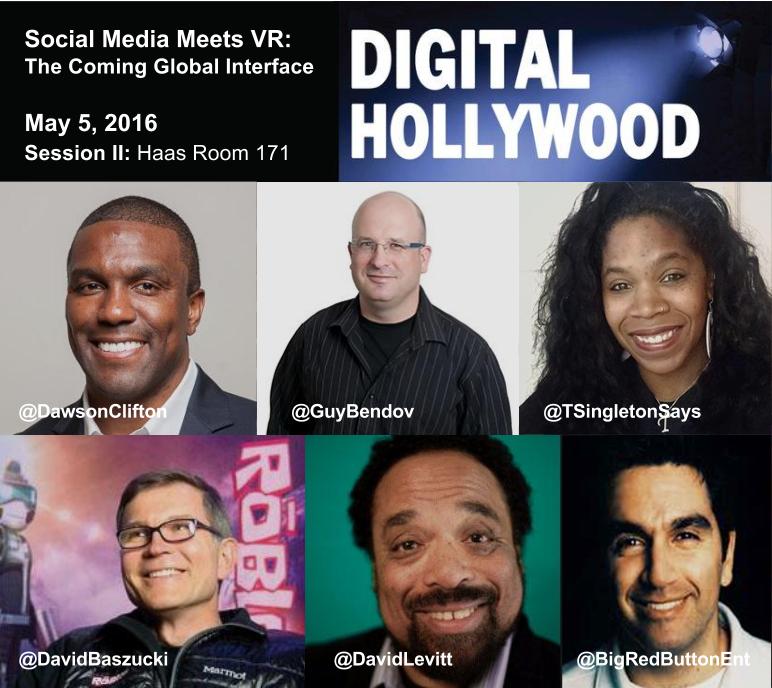 Clifton Dawson, President of Greenlight VR, moderated a panel discussing how social media and virtual reality will intersect to form a new global interface. “This discussion is one that we will look back on in a couple decades, and realize it’s a hard topic but it was foundational,” said Clifton.

Panelists, guided by Dawson, took a deep dive into each of these topics, coming out on the other side of the discussion with five key takeaways.

1. Infrastructure, Technology, and Policy Is Needed
In a near unanimous agreement, the panel felt that virtual reality has become the next frontier in entertainment, and that there are numerous early early signals pointing to VR becoming mainstream and fulfilling its social future. However, the panelists also agreed that for consumers to replace today’s mobile social networking sites with virtual reality, many technologies need to be in place, including ubiquitous WiFi connection, secure systems to ensure privacy, and common interfaces.

2. Social Virtual Environments May Not Need to Match Reality
There is still a lot of disagreement about what "social" will look like in VR. The panelists offered many different examples of how consumers may eventually interact socially in VR, from interactions with a friend to socializing with a responsive, intelligent avatar. Another important topic was on whether VR needed to enable users with behaviors and interactions that mimic real-world actions,David Baszucki (CEO, Roblox) emphasized that a virtual environment, where co-presence is the objective, must recognize that fluidity of experience is more important than near-perfect computer generated graphics.

3. Interfaces With The Real World Is Required For A Social VR
Guy Bendov (CEO, Sidekick VR) offered advice to any social VR platform, saying it must not be a closed metaverse. Instead, many different native virtual reality and non-VR experiences need to interact seamlessly within any virtual environment that achieves true social co-presence.

Dr. David Levitt (CEO, Pantomime Corporation) added, “What matters most is that the connection between the virtual and real world be lightweight, which is what I have devoted my career to, ever since it began with VPL Research in the early 90’s.” 4. Rules Of Engagement Are Still Being Sorted Out
Tunisha Singleton (Digital Media Specialist and PhD Candidate, Fielding Graduate University) warned that we still don’t have a established norms for how consumers should interact socially in virtually reality, and thus, much can go wrong in “social VR”. Singleton offered a simple, yet complicated challenge for experience designers: “How would you facilitate meeting new people in VR? Should we?”

5. The Jury Is Still Out on Monetization
As was researched in the recently published 2016 Industry Report, developers don’t yet see a dominant monetization model for the experiences they create. However, the panel stressed classic business logic. “Traditional business models will dominate. We shouldn’t expect new models to emerge,” said Bendov. Bob Rafel (CEO, Big Red Button Entertainment) agreed and offered that importing the free-to-models end up hurting the medium in the long term.

For more on consumer experiences with VR and what they say they want, pre-order the 2016 Consumer Adoption Report, or contact research@greenlightvr.com to inquire.