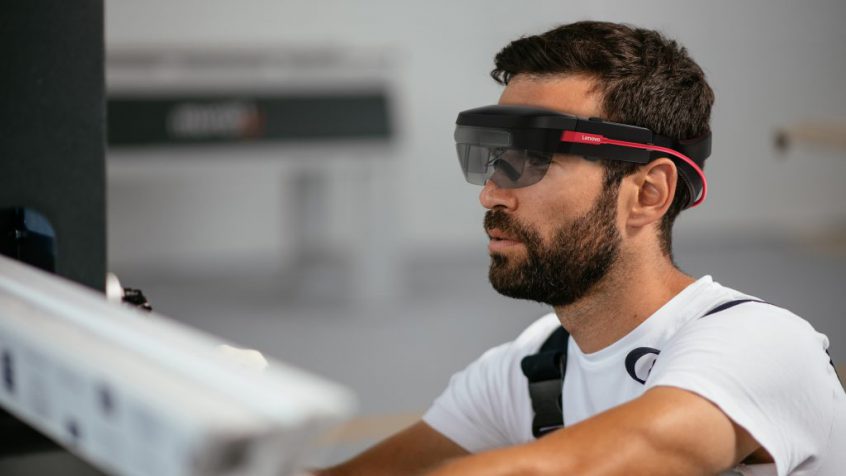 As Santa Clara prepares to receive the Augmented World Expo in its 10th year, a number of major product debuts and newly announced partnerships have come to light,  building excitement for one of AR's largest conferences. In particular, head-mounted displays for AR are emerging as an increasingly viable product category for 2019.

The Lenovo ThinkReality A6 HMD has already drawn a slew of direct comparisons from various media outlets to the venerable Hololens platform. Not only is the A6 stylistically and ergonomically reminiscent of Microsoft's AR headset, but it is also expected to share a significant portion of its target market with the Hololens. Lenovo's device is positioned as an enterprise-focused device, sharing many potential applications, such as remote assistance and enhanced training workflows.

Lenovo’s accompanying ThinkReality software platform, however, offers an important differentiator. Company leadership asserts that “the intention behind the software is to provide enterprises with the ability to create their own AR apps”, and spare clients the potential difficulty of being tied to a specific ecosystem, such as Microsoft’s. Promising to be both cloud and hardware-agnostic, ThinkReality’s approach may prove both novel and effective in increasingly competitive enterprise cloud services market.

Glass Enterprise Edition, known as one of AR's greatest underdogs, has just received a successor called EE 2. The new headset sports many focused improvements in specifications (including an XR1 processor from Qualcomm), while largely maintaining it's predecessor’s overall design and form factor. Among it's most compelling upgrades is the replacement of the original Glass EE's proprietary operating system with a more up to date version of Android (8.1), which includes support for key features such as Android Enterprise device management. The update is certain to lower barriers to entry for developers and improve the platform's selection of solutions and applications.

While these updates are unlikely to raise prices significantly, it remains to be seen whether Glass EE2 presents enough of a value add for current customers of X, the Alphabet subsidiary responsible for EE, to consider upgrading, especially in an increasingly competitive field populated by incumbent rival hardware such as the Vizix M400 and the Realwear HMT 1Z1, the latter of which has supported Android 8.1 since March of this year.

In an apparent rebranding from Valve spinoff CastAR, newcomer Tilt Five has announced a specialized piece of augmented reality, gear, focused solely on a specific area of entertainment; tabletop gaming (TTG). The new device employs a dual projection system against a mat peripheral recognizable to anyone familiar with CastAR’s technology. The company appears more bullish on head-mounted AR this time around, as well as more committed to tabletop gaming as a core application. While similar in functionality to many current-generation mobile AR experiences, Tilt Five’s use of a head-mounted device offers the company an opportunity to build a proprietary ecosystem in the TTG market.

While widespread adoption of AR headsets is still over 5 years away, the designs and technologies of current generation devices will provide crucial insight into how future devices will be use.

Greenlight Insights will be covering AWE live in Santa Clara, and is hosting its own executive strategy conference on October 16-18.