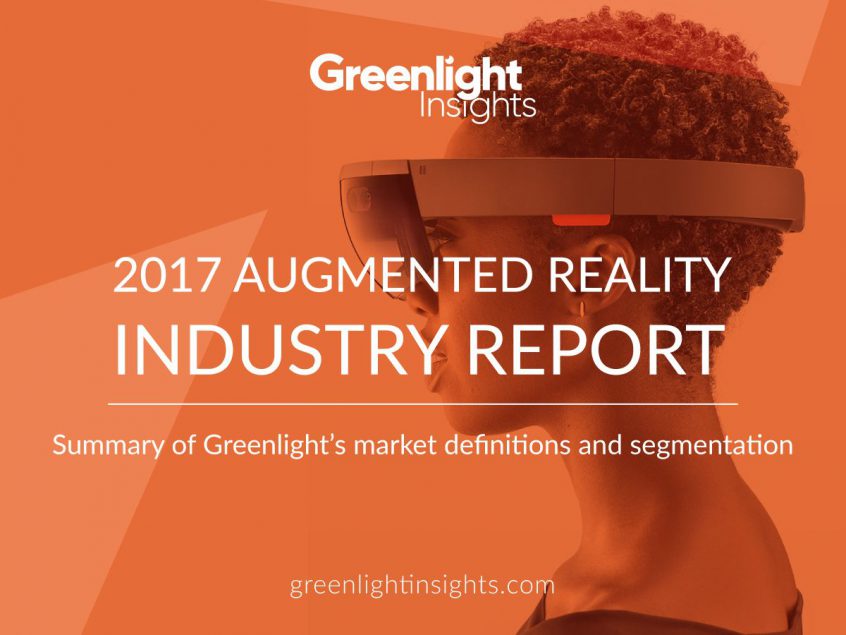 SAN FRANCISCO (October 5, 2017) — Despite the buzz about mobile augmented reality (AR) in the wake of Apple’s recent ARKit and iPhone X announcements, head-mounted displays (HMDs), such as Microsoft’s HoloLens are expected to be widely adopted by consumers and enterprises in 20198 and beyond. Use of AR applications on HMDs is expected to have major impact in many enterprise and industrial verticals, but the tipping point for adoption is still several years away, according to Greenlight Insights (@AskGreenlight), the leader in virtual and augmented reality market intelligence.

“We are expecting a faster adoption curve for AR smartglasses and head-mounted displays than what we have seen with virtual reality headsets, but optimism should be tempered as the AR ecosystem still must address substantial fundamental problems” said Clifton Dawson, CEO of Greenlight Insights. “Above all, however, there are exciting new markets being created as we speak. What see from Apple, Google and Microsoft so far is just the tip of the iceberg.”

Massive Sorting-Out Process Remains on the Path to Mainstream Adoption

According to the report, there will be a natural sorting-out process, during which various display configurations evolve to optimize vertical use cases. The report also finds that despite the presence of several well-capitalized companies, it’s still too early for a clear leader. There are still several highly anticipated entrances expected, including Magic Leap and Avegant.

“The building blocks for augmented reality are rapidly evolving. Historical challenges, such as tracking and registration, display technology and rendering, are rapidly being solved by software-driven solutions,” said Alexis Macklin, Analyst at Greenlight Insights. “Yet, at the same time, more advanced building blocks leave a lot to be desired. Authoring tools and interaction techniques for AR applications  are probably eight to ten years in the future.”

About the 2017 Augmented Reality Industry Report

The 2017 Augmented Reality Industry Report is Greenlight Insights inaugural semi-annual forecast and analysis about the worldwide augmented reality technology and content market. Analysis is drawn from data on hundreds of companies from public and proprietary sources, and extensive quantitative research conducted by Greenlight Insights. The report is intended to help decision-makers at global technology companies, Fortune 500 brands, startups, and investors better understand the current technologies, as well as the strategic actions of major and emerging industry players. The report includes:

The report is available now and can be purchased online at https://www.greenlightinsights.com/industry-analysis/2017-augmented-reality-industry-report.

Greenlight Insights is the world’s leader in virtual and augmented market intelligence, and provides information solutions to global technology, entertainment, and marketing professionals to help them make strategic decisions about the future of immersive technology. Visit www.greenlightinsights.com for more information and follow @AskGreenlight on Twitter.