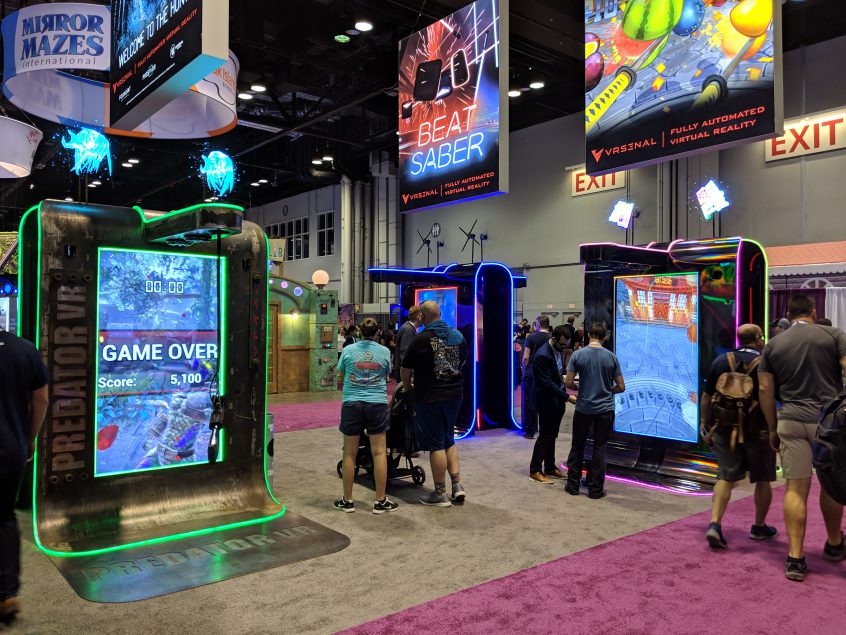 Last year, the Greenlight Insights team predicted the popularity of major IPs like Star Wars and increased investments in regions like China, Japan, and Korea to be the biggest influencers in the growth of location-based VR entertainment.

Although The Void’s Star Wars experiences and APAC venues are finding popularity and having major impact on the sector, it was Dave and Buster’s expansion into LBE VR that won the year. The FEC giant deployed VR in almost all of its 120 locations across North America, making it the biggest deployment of VR to date by a single operator.

Some of the biggest trends facing the sector in 2019 will include mirroring the success found in Dave and Buster’s deployments and venturing into new areas of LBE VR to gain a competitive edge.

Beyond the initial cost of hardware, commercial licenses and standard upkeep of running a business, hiring a workforce is one of the most costly factors of running a VR experience, as attendants are needed to set up and run the experience for customers.

VRsenal’s attendant-less VR stations were well received at IAAPA and may have an impact on malls and entertainment centers as VR presence in the out of home market expands.

VR may not be completely attendant-free, with complex free-roam setups needing more guidance, and even simple setups like VRsenal’s needing an attendant to maintain and clean. System manufacturers like VRsenal, VRstudios, and Virtuix Omni will continue to increase ease of use for attendants and customers in 2019 to cut costs for operators.

Another goal for operators is to maximize the cost per square foot. One proven method came from Dave & Buster’s deployment in partnership with VRstudios. The interactive experience accommodates four players in a motion simulator. The $5/5-min experience can generate up to about $200 per hour if it is fully booked, accounting for quick setup times. This is fairly impressive as most other interactive digital ride simulators accommodate up to two at Dave and Buster’s.

The model has proven successful so far with CEO Brian Jenkins revealed preliminary plans to expand content on the VR attractions in a 2018 Q2 earnings call.

These pallet attractions (self-contained systems that are put in place by forklifts moving them on a single pallet) will become more widespread in 2019 as other major entertainment centers and venues look to successfully deploy quicker, smaller print VR experiences.

Standalones will take the place of mobile headsets in entertainment experiences or VR roller coaster and ride simulators. Standalone headsets are cheaper than the combination of a low-cost cradle and a smartphone. From Pico to Oculus to HTC, options are now available for operators to consider an all-in-one hardware solution.

A current hurdle for the adoption of standalone headsets will be available content libraries and licensing of that content. Standalone headsets will be great options for operators that produce their own content, as is the case with many VR roller coaster and ride simulators. Operators focusing on immersive media content like 360-degree videos or 3D short films may have to navigate custom licensing deals.

2018 marked a stand-out year of LBE VR content for the family and 2019 will see a continuation of these offerings. Massive IPs will continue to step into the LBE VR sector, demonstrated this quarter by companies announcing plans for 2019. Those plans include The Void adding more Disney IP to its offerings and Hologate partnering with Rovio for Angry Birds VR.

Currently, there is still skepticism from larger entertainment companies regarding the profitability of out-of-home VR entertainment. As profitability is proven, studios will be able to win more favorable licensing agreements, clearing a path for more content, exclusively available to LBE VR venues.

If Dave and Buster’s “won” 2018 in the LBE VR sector, Beat Saber won 2018 as the top VR title across consumer distribution platforms. The viral hit left many consumers—VR headset owners and general gamers alike—wanting to master the lightsaber rhythm game. Developer Beat Games officially launched commercial licenses in the second half of 2018 through approved providers such as Springboard VR, Exit Reality, and Ctrl V.

2019 will see a plethora of local Beat Saber competitions. A public competition was held in partnership with Beat Games, Virtual Athletics League, LIV, and SpringboardVR August 17 and 18, with over 50 global venues participating. As seen with past popular rhythm games like Rock Band and Guitar Hero, the popularity of Beat Saber can extend beyond the difficulties and mechanics of the game, as the content is expanded with different songs. The game appeals to a mass audience, regardless of age or region, with its intuitive game design. We expect the popularity of Beat Saber to continue well into 2019. LBE VR operators will capitalize on that popularity to grow a community (and consistently returning customers) by fostering local competitions.

Looking ahead to 2019, the LBE VR market will continue to see rapid growth, both in the expansion of proven concepts, and in the exploration of new systems and content. The global out-of-home VR entertainment market is vast and diverse, with different regions seeing different forms of success. What is becoming clear is that no single profitability path is universal across all regions and types of content. The unique out-of-home sector will require an understanding of the complex and ever-changing regional landscape. One thing that is certain, is there are ways to profitability and those will continue to be discovered in 2019.