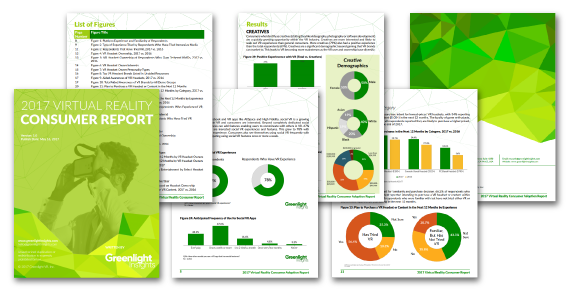 Among the survey’s findings that indicate social VR’s consumer appeal are:

“Evidence of social’s potential impact on consumer VR adoption can be seen in collaborations between major social networks and VR developers,” said Clifton Dawson, CEO of Greenlight Insights. “Social networks like Facebook and WeChat offer the large consumer base VR players are looking to attract. The industry is at the very beginning stages of understanding which types of social experiences will win with consumers, but our data shows that social will become a basis for competition for anyone creating consumer VR experiences.”

Creatives Offer New Gateway to Mainstreaming VR
Greenlight suggests “creatives” should be considered the gateway to VR becoming a mainstream consumer technology, just as avid gamers are considered early adopters. About half of survey respondents who self-identified as creative (stating they like videography, photography or software development) reported they have already tried both VR and 360 video. Compared to 41 percent of the total sample, creatives are also more likely to seek out another VR experience (52 percent). They also report having a much more positive experience.

“Virtual reality has always been more than a medium for gaming experiences and technology savvy consumers are quickly learning that,” Erica Bishaf, Research Director for Greenlight Insights. “Our findings from multiple studies suggest that some platforms in the VR ecosystem may be overly focused on gaming. The reality is that consumers have a wide variety of interests for using virtual reality, including creative expression. Platform and content providers would be wise to consider these bigger, richer findings as they develop their content and marketing strategies.”

Methodology and Availability
The 2017 Virtual Reality Consumer Report offers a comprehensive view of consumer opinions and expectations for major products, applications, content, prices and more. This is the fifth wave of consumer research about virtual reality conducted by Greenlight Insights, with previous consumer surveys conducted in Russia, the U.K. and the U.S.

The report includes key findings from Greenlight Insights’ comprehensive survey, conducted in March 2017, of more than 2,000 U.S. consumers, ages 18-70, and includes headset owners as well as users and non-users of VR. Topics covered in the survey and featured in the report include:

More details on the content of the 2017 Consumer Report, as well as how to order, can be found at http://greenlightinsights.com/reports/2017-virtual-reality-consumer-report/.